Jared Diamond spoke at the Commonwealth Club last month.  I have always been a huge fan of his Pulitzer prize winning book “Guns, Germs, and Steel” as well as “Collapse” and other works.  This talk introduced his new book “The World Until Yesterday: What Can We Learn from Traditional Societies?”   The answer: more than you think.

The talk is very interesting but only one story he told was really relevant for this blog.  He said this:

“Most of us have probably read in high school about the medieval peasants in Europe having a strip system where a peasant did not have one block of land, and peasants would have 7 strips scattered in 7 different places.  We might say how stupid that is because the peasant has to walk between 7 different strips.  Why not just amalgamate those strips?“ 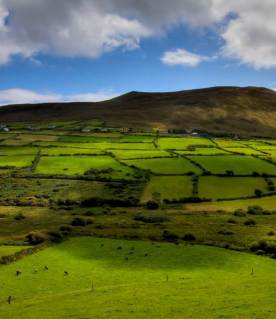 “There was an anthropologist doing a study in Peru, where these potato farmers in Peru scattered their strips; typically 15 different strips all of them tiny. An agricultural expert came in and said ‘How mind-blowingly stupid these peasants are.  They should just trade and amalgamate their land.’ “

“But it turns out that if you have 15 strips in different directions,  the risk of an insect blight, or people stealing your stuff, or a frost, varies in different directions. So if you have 15 strips, what the peasant cares about is that no matter what happens their potato yield will never drop to the point that they will starve.  If you put all your potatoes in one big block, it might save walking back and forth, an in 50 years your yield might be higher, but in 17 of those 50 years you would have starved to death.  If your strips are scattered in different directions, then you can virtually guarantee that every year at least some of those strips will produce.“

The question we should ask ourselves is why would the agricultural expert find this to be mind-blowingly stupid?  (And why would I think that myself quite frankly before the risk was explained?)

The reason of course brings us back to the “Enlightenment Bias” that all phenomenon can be explained at the core by fairly simple rules.  Thus a field is a field is a field.  Farming is an action that you do in a field, and nothing else matters.  It is this desire to reduce activity to the simplest form, and then perfect that, that blinds us to the risk.

Ken Burns documentary “The Dust Bowl” portrays an infamous example of just this sort of thing.  The dust bowl was caused by a huge mono-culture: everyone was growing wheat. When things started going bad, it started going bad everywhere. Farming in that part of America was negated for almost a decade.  We now know that large scale mono-cultures are risky.  It is far better to grow a mix of things, because if one crop is wiped out, you can fall back on the rest that is not effected.

Yet, we have not learned this lesson yet in the automation of business processes.  The ideal is always “Find the one, best practice, and get everyone to do it.”   It sounds good in abstraction, just like it the idea to amalgamate the fields sounds good. It sounds good because of the Enlightenment Bias.

In my last post, How Technology causes Fragility, I talked about how mono-cultures caused by technology can make an organization weaker.  What stuck me about Jared Diamond’s statement is that not only is this true, but ancient cultures had figured this out the hard way.

It also strikes me that our goal should not be that of finding the best process and creating uniformity.  Efficiency is not uniformity.  Instead, don’t worry about enforcing a best practice, but instead attempt only to identify and eliminate “worst practices”.  A variety of approaches should be encouraged, because if one of those approaches turns sour, you can fall back on the others.