A new study from Oxford says that 47% of the jobs in America are at risk of automation.  There is a lot of fear that a job automated is equivalent to a job eliminated. It is the same fear that fueled the Luddites, however history shows that fear to be misplaced then, as it is now.  Automation drives a transformation of the workplace, not an elimination.

The report by Carl Frey and Michael Osborne at Oxford University is called “The Future of Employment: How Susceptible are Jobs to Computerisation?”  says:

… Based on these estimates, we examine expected
impacts of future computerisation on US labour market outcomes, with the primary objective of analysing the number of jobs at risk and the relationship between an occupation’s probability of computerisation, wages and educational attainment. According to our estimates, about 47 percent of total US employment is at risk. We further provide evidence that wages and educational attainment exhibit a strong negative relationship with an occupation’s probability of computerisation.

Pretty scary, right?  Almost half the workforce — gone.  In the early 19th century automated weaving looms were introduced in England, and in 1830 the followers of Ned Ludd protested (and rioted) on the theory that jobs had been taken away by automation.  A large part of the workforce was doing the kinds of things that no longer needed to be manually performed.  The argument was that without these jobs, the economy would collapse as these people sat around without any work, and without any money to purchase the goods from other industries.  Martin Ford’s book “The Lights in the Tunnel” gives an updated, Silicon Valley view of the same fear of people being displaced from work.  He talks about Luddites, but insists that ‘this time it is different.’

History actually shows a different story.  While automation undoubtedly has a short term effect of displacing particular workers who have grown accustomed to their present habits, it does not show any trend of decreasing the overall size of the economy, or of decreasing the number of jobs available to the population.  One only needs to consider that around 98% of the manual labor performed in ancient Egypt is now automated, but that does not mean that 98% of the workforce is now sitting idle.  The automated looms opened up new opportunities to design fabric, while the increased production opened up new opportunities to distribute and retail the fabric and clothes.

Transformation of the Workplace

What does happen, is that when a routine job is automated, it opens the possibility for other non-routine jobs.  When a robot is placed on an automobile assembly line, it displaces an assembly line worker, but it creates a need for a programmer as well as a new support chain for the machine.  I am not saying it is one-for-one (i.e. there is one programmer for every assembly line worker replaced) but simply that new job categories are created that the Luddites could never imagine, and therefor did not enter their calculations about the economy.  Desktop publishing displaced ink-stained typesetters, but opened the way for three-D rendered graphics and self-published books.

Automation does cause a change in the aggregate nature of work.  Only routine work can be automated. The new jobs created tend to be less routine, and more knowledge oriented.  This has the overall effect that the working population is tending to be more knowledge workers today than ever before.  I have used these graphics to illustrate this trend:

This is intended to represent office workers at the dawn of the Internet age where are  majority of office work is routine work, with a smaller number of people who are primarily engaged in knowledge work.  Many of these routine jobs have been automated or otherwise eliminated, and we might represent the current economy more like this: 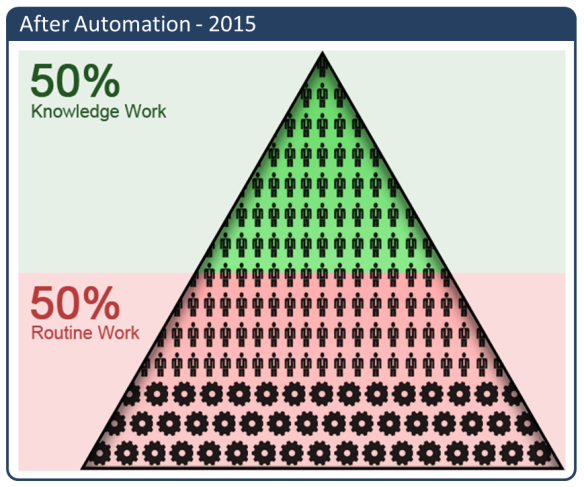 In spite of all the automation that has appeared in the office, and also in spite of the large unemployment numbers today, according to US labor statistics, the total number of human workers in 2013 is 20% more than in 1995, from 114 million to around 139 million.  Automation over that period has not decreased the amount of employment.

However, because many of the routine jobs have been automated, we find that more people are doing knowledge work today.  Estimates of the actual percentage vary, but it could be as high as 50% of the labor today is knowledge work.

Thus the automation of routine tasks by BPM and other automation techniques is not in general eliminating work, but instead transforming the work that people do from routine to knowledge work.  You don’t have to manually print letters and put them in envelopes, but you still have to decide what to write in your letters.  3D printers automatically make intricate physical object, but you still have to decide what to make and design the actual shape.  This transformation has positive and negative aspects.  Knowledge work is generally more interesting and satisfying than routine work.  However, it is also more challenging and stressful as well.  Let’s face it: routine work is a lot easier than knowledge work.

This represents a huge opportunity for Adaptive Case Management as a technology to support innovative, creative work. As automation continues to displace routine work, possibly up to 47% of the work being done today, the demand for new technologies to meet the need of knowledge workers will dramatically increase.